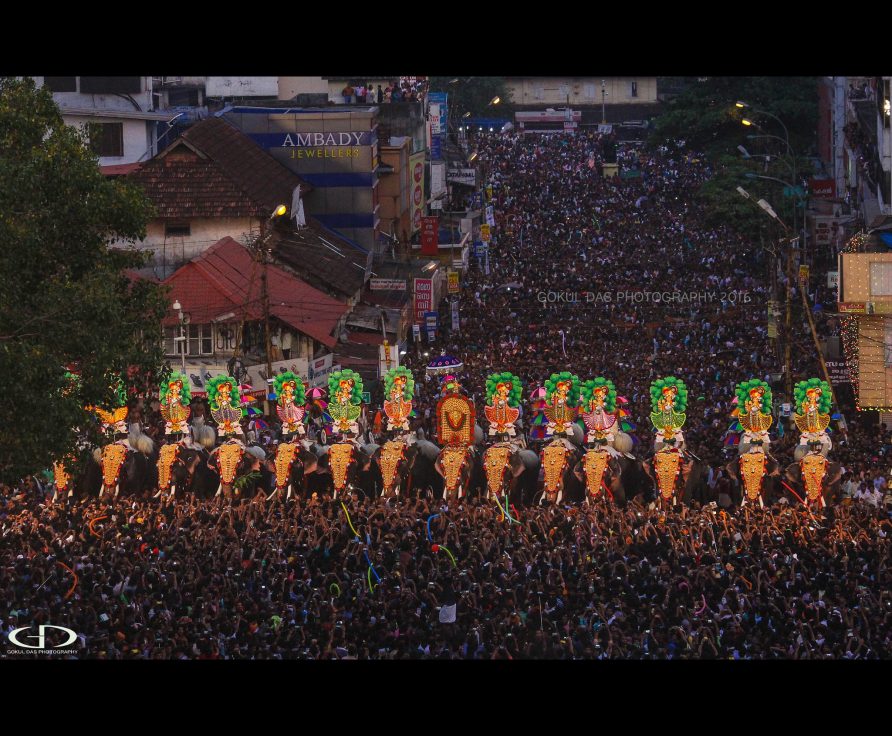 Thrissur Pooram is an annual Hindu festival held in Kerala.

Kerala is the land of never-ending festivals and Thrissur Pooram is without a doubt the grandest of all. Thrissur Pooram is the brainchild of Sakthan Thampuran, a powerful ruler who is also known as the architect Thrissur town. The 36 hours nonstop festival is celebrated every year in the month of Medam (mid-April to mid-May) as per the Malayalam calendar and is held at the Thekkinkadu Maidanam, which surrounds the famous Vadakkumnathan Temple, that also marks the epicenter of Thrissur town.

The main attractions during the festival are Kudamattom ceremony and Ilanjithara Melam which are witnessed by a huge number of devotees from all over the state as well as the world.

Kudamattam is a Malayalam word which means “changing UMBRELLAS”. It’s a mesmerizing competition that takes place during Thrissur Pooram. Two famous teams Thiruvambady and Paramekkavu compete with each other. They sit on beautifully decorated elephants facing each other, members of each team hold an umbrella which is colorfully embellished of the same color and it is changed frequently by challenging each other.

The Ilanjithara Melam led by Peruvanam Kuttan Marar is the most delightful music in Pooram that electrifies the festive mood. Ilanjithara Melam is an assembly of percussion performance artists held at Ilanji (known as Bullet Wood Tree Mimusops Elengi) tree at the courtyard of the Vadakkunnathan Temple in Thrissur city during the Thrissur Pooram. It is considered one of the best platforms for traditional Kerala music and the largest assembly of percussion artistes in any other Poorams.

Thrissur Pooram’s main Fireworks/Vedikettu is well renowned all over the country. This amazing display of fireworks is held in the heart of Thrissur city, in Thekkinkadu Maidan.